Valencia is known worldwide for its oranges, but its long days of warm sun and position next to the Mediterranean Sea also make it an ideal place for growing grapes. Within the general region one can distinguish seven or eight main wine producing areas, each with its own specific topography, climate, and very often its own dominant grape variety, resulting in an array of very different wines. In short, there is a very interesting wine world to discover here in Valencia! 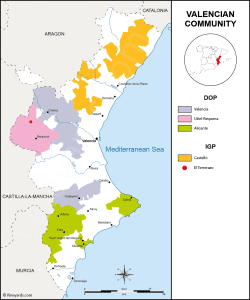 The Valencia region has a long history when it comes to wine making. There is evidence that 2700 years ago people were already producing wine here, as shown in excavations in the Utiel-Requena area. The Iberians probably learned the art of making wine from the Phoenicians (from around 800 BC), while later the Greeks and the Romans introduced new grape varieties and other methods of wine making. 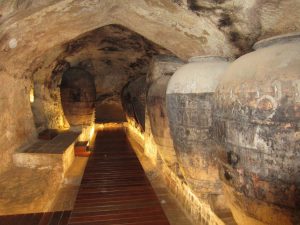 Wine making became more and more a commercial activity; in Spain it got a huge boost in the 19th century with the arrival in Europe of ‘Phylloxera‘ from North America, a small insect that feeds on the roots of the vine, eventually killing it. In the 1860s it appeared in France, where, within 20 years, it destroyed more than 70% of the vineyards. The French then came to Spain to buy wine – also to Valencia, and in particular the Utiel-Requena region; in the 1880s a railway was built from Utiel to the Valencia port, just for the purpose of exporting its wine. In those days more than 50 wineries were established around the railway station in Utiel. When the solution to the Phylloxera problem was found (grafting European grape varieties on resistant American rootstock), the French demand for Spanish wine reduced; many people removed the vines and planted other crops (oranges!), but grape production and wine making remained an important part of the regional economy.

In general, the quality of Valencian wines was not very high in those days. Wine was mainly produced for export and to blend with other wines, adding structure, tannins and colour. Indeed, even until the end of the 20th century Valencia did not produce much quality wine, but in the last two decades the quality of Valencian wine has improved enormously, and now award-winning wines are being made in the region.

Valencia has quite a large number of native grapes that are now being used for making quality wine. In the 1970s-80s the Tempranillo grape (from the Rioja region) and French varieties like Cabernet Sauvignon, Merlot and Chardonnay were promoted in Spain, causing the (virtual) disappearance of many autochthonous grapes.

In the Terres dels Alforins region south of Valencia, from the late ‘90s, a new generation of wine makers tried to recuperate ‘lost’ grape varieties like Verdil, Mandó, and Forcalla, and is now using them to make interesting and high quality wines.

In the Utiel-Requena region the Bobal grape is dominant; in the past almost all grapes were Bobal, currently only 75% of all grapes is Bobal – a tannic red grape, nowadays used for making high quality varietal wines, something that only 20 years ago seemed impossible, as the Bobal was considered only good enough to blend with other wines. 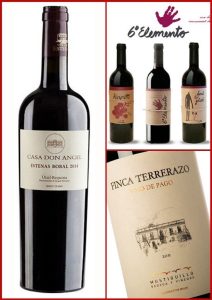 Photo: some top Bobal wines from the Utiel-Requena region.

The other 25% of the Utiel-Requena grapes is made up of French grape varieties, but the last 10 years mainly white grapes have been planted, for making Cava, the Spanish sparkling wine.

The Alto Turia area, just north of Valencia city, at 500-1000 meters altitude, is known for the white Merseguera, which produces subtle wines with a relatively high acidity. Also in Utiel some high quality Merseguera wine is produced.

The low-lying regions near Valencia City and in Alicante are known for the Moscatel grape, producing an aromatic white wine. In the past these sweet grapes were used for making raisins and sweet wine, but nowadays mainly dry wine, and some of them are really good!

In the warmer south, around Alicante, the Monastrell grape is used for powerful dry reds, as well as the historically significant Fondillón, the sweet ‘wine of kings’, which in the 17th-18th century was exported all over the world.

On our wine tours we usually try to combine culture and wine; we go to the picturesque old village of Requena and visit some 11th century ‘wine caves’ for a short guided tour and a first wine tasting – really interesting! Or we go to excavations of an Iberian village, and visit a model Iberian homestead. After the “culture”, we go to a winery for a guided tour, visiting the vineyards, production area, cellars etc and learning about the wine making process, followed by a tasting of some of their wines. 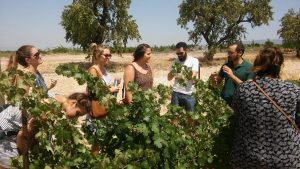 After the “culture and wine”, we go for lunch, a 3- or 4-course lunch (with more wine), in one of the villages – a local village lunch or a gourmet lunch, both are possible, whichever you prefer.

We go to all the Valencian wine regions, but we only take you to smaller, usually family owned, wineries that produce high quality wines.

Apart from wine tours we also organise city breaks in Valencia, for individuals or groups, including hotel, transfers, meals and excursions in the city, to wine regions and the Albufera Lake with its rice fields, just south of Valencia, or wine tastings in Valencia city. Our tours are also wheelchair accessible.

All holidays and tours are tailor-made.

This is an necessary category.